When working at Purdue University, Jared Thompson thought Blinder could be a big help for the athletics department. After a trial, his colleagues agreed and Purdue became one of our first US college clients. This month, Jared’s interest in Blinder stepped up a few notches when he joined our team.

With a CV that also includes roles in communications at the National Collegiate Athletic Association (NCAA) and Oklahoma University, Jared will be focused on US business development from his Las Vegas base. Here he talks through his journey from cajoling student-athletes for interviews at Oklahoma to playing a key role with Blinder. 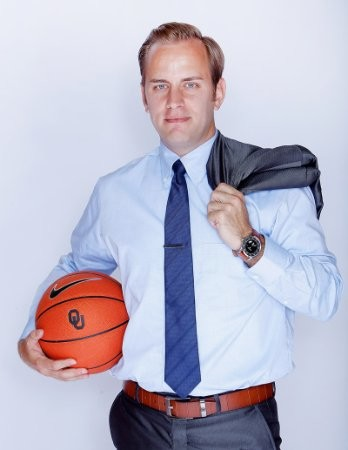 I didn’t need a job, but when Ross McConnell’s number illuminated my screen, I secretly hoped he might ask me to join the company he co-founded.

I first met Ross over a year ago in San Francisco, following a sports business conference at Twitter HQ. I loathe networking sessions. Yet I had the fortune to be pinned to a cocktail table across from a charming Kiwi. We talked about that day’s takeaways, the future of sport, fatherhood and, of course, the prospects of his new business Blinder. I was intrigued about the product he was touting, but more impressed by his passion while plugging it.

The crux of every communications manager’s daily headache is interview coordination. In sports, this includes specifying the time and place in which one would need to stand in order to hand their mobile phone to an athlete in order to speak with a reporter. The entire method is inefficient and unreliable, and appallingly common.

Ross and his long-time mate and former junior swimming rival, Caley Wilson, partnered to find a way to define and automate the process. They had fine professions and didn’t need to take a plunge into the abyss of entrepreneurship. Yet they’d created a system that allowed communications managers to set up interviews directly to athletes’ personal mobiles without exchanging phone numbers with the caller. I foresaw, just as they knew, that such a solution could make a lot of people very happy.

My first job was assistant sports information director (SID) at the University of Oklahoma. It was one heck of a ride. We were always the biggest story in our market, we had fantastic resources and, best of all, nearly all our teams were winning and ranked. There were some amazing moments. I remember once getting a call from a job recruiter and having to text reply: “Can’t talk now. I’m on the sideline at the BCS National Championship.” I had a role in everything from crafting content for Heisman winners’ promotional campaigns to mentoring students who now have leading roles in the industry. Of course, it wasn’t always sunshine and cookies.

When you’re on call night and weekends, in addition to the 9-to-5, it’s impossible to tune out work. The grind ate away at me. I became incapable of appreciating all the joys and privileges the career provides. I had to cling to moments of tedium, hoping they would give me purpose, and I stepped out of all the celebrations.

The idiom states: time is money. But time is also mental health and I found myself in a position of dreading the morning alarm. It was task after task. Day after day. And the chore of standing around to hand a phone to an athlete was the overtime buzzer-beater of biggest wastes.

If Blinder had been available then? Honestly, I would have been a skeptic. Today, I’m a workplace psychology enthusiast and productivity fanatic. I can straight-faced say that after email, there’s not a more beneficial tool available to comms managers. Think about that for a minute. How awful would your job be if you couldn’t use email? I wonder why people do this job without Blinder. It seems crazy to me.

Imagine the time that’s wasted in connecting an athlete (or your client) on a phone call. Consider this:

Sound familiar? That’s a best-case scenario. Heaven forbid the reporter not answer or the athlete leave before you can connect the two. A 10-minute phone call can take 90 minutes or more away from your day. SIDs know this too well. Honestly, SIDs do everything we can to limit these phone calls, which is tremendously counter-productive to the mission we’re paid to accomplish.

"I wonder why people do this job without Blinder. It seems crazy to me".

Caley and Ross didn’t just unravel that time suck. They enhanced scheduling, organization and privacy. They put it all into a streamlined dashboard. Blinder conquered the absence of control – for all parties involved.

Fast-forward: After eight years at Oklahoma, I met my wife and moved to Indiana, hooked up with the NCAA and, after three years, took a new role as Purdue’s head of digital strategy and content. Although I wasn’t in a traditional comms role, one of the first things I did at Purdue was introduce Blinder to the team. We quickly signed on for a trial and I’d never heard so much praise for a product. Committing the Boilermakers long-term was probably Ross’s easiest sell.

Less than a year into my tenure at Purdue, my wife was offered a position in Las Vegas, her hometown. While leaving Purdue so rapidly was heartbreaking, we decided we would regret not taking the opportunity to have a larger support system for our newborn son and watch him grow up around his grandparents, uncles, aunts and cousins. (The winters aren’t too bad, either.)

When Ross called to discuss a potential position, he wasn’t offering me a sales job. (You’ve read my background; I’m no salesperson.)  He was offering me a vehicle to help my communications colleagues solve a problem they may not have understood they have.

I’m encouraged that my new role can help my industry friends, new and old, enjoy what they do so much more. Often the most difficult thing to do each workday is to find time to do something good for oneself. Blinder offers to relieve that burden. And it won’t ever feel like a job for me to spread peace of mind.