The Future of Radio...is Video

Imagine if every interview could be video... At Blinder, we help storytellers create amazing content with equipment everyone already has at their fingertips. Our community of content producers represents the leading innovators in mobile journalism and remote broadcasting.

“Radio has no future.”

On Nov. 2, 1920, the world’s first commercial radio station, KDKA-AM Pittsburgh, launched. Within four years, there would be 600 stations in the United States alone. One hundred years later, with more than 44,000 stations worldwide, the radio industry sits at a tipping point as COVID-19 accelerates trends of the past decade, with digital and on-demand formats becoming the universal media of choice.

Experts agree that for radio stations to survive, they’ll need to adopt digital infrastructure and adapt to non-linear channels. To compete in this media landscape, their content will have to serve a wide range of audiences on various platforms. And, to reap the rewards of those channels, many will turn to video storytelling.

Experts say the following trends will affect the business of radio stations, setting the stage for a content strategy that relies on video content production. 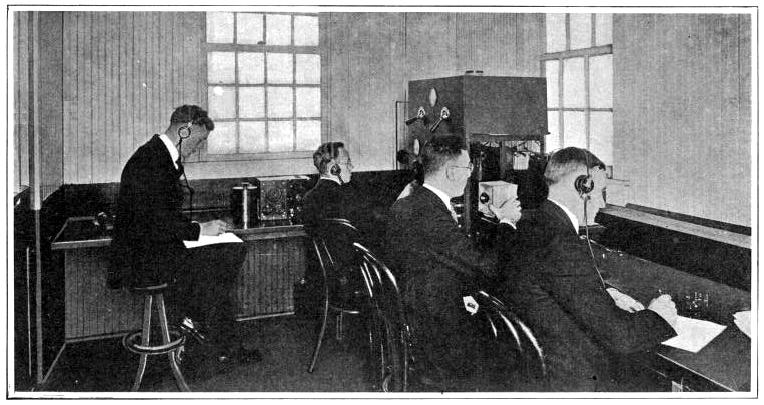 Circa 1921 photograph of an early transmission room used by radio station KDKA.

Radio stations will broadcast to more screens than actual radios.

Radio’s monopoly as the most accessible medium is rapidly diminishing. In 2016, the UN estimated that radio station broadcasts reached five billion people, or, 70 percent of the world’s population. In developing countries, an estimated 75 percent of households had access to a radio.

Consumer radio supremacy lies in its affordability, which is quickly being met by improvements to digital technology. According to the International Telecommunications Union, mobile broadband prices have dropped by 50 percent over the last three years. This has allowed half of the humans on Earth to gain access to high-speed internet.

There are now an estimated 8 billion (and growing) televisions, smartphones, tablets, and computers in active use on this planet. The bulk of radio receivers still in production are installed in automobiles, with more and more replacing analog interfaces with HD touchscreens.

“2020 is the year that the in-car AM/FM radio has hit the proverbial iceberg,” Derek Viita, who authored a survey of thousands of car owners across the globe, wrote. “While radio still has unique advantages, the pandemic has only worked to increase the adoption of other media sources.”

There’s no doubt: the screen is king. It’s impossible to go anywhere without interacting with a screen. Former fortresses of solitude -- restrooms, gyms, taxis, and even petrol pumps -- have all had their white space invaded by screens to ignite your dopamine receptors and flare your impulses.

This is great news for radio broadcasters, because...

Radio stations might be better equipped than their television counterparts to produce digital video content for their communities. The deep pool of talent and the “always-on” culture of radio broadcasters gives stations smooth waters from which to set sail on a multimedia voyage.

Audio storytellers are often better experienced in telling narratives and conducting interviews because they have to immerse their audience in the story through hearing, whereas visual content producers have an obvious advantage in grabbing attention.

The behavior radio producers need to shift is programming for later rather than live. While radio purists point to two recent Nielsen surveys illustrating a rebound for terrestrial radio, radio futurist James Cridland cautions that while the number of live radio listeners has improved since the start of the pandemic, the amount of time they devote to the medium has declined, especially with younger demographics who favor podcasts and streaming music.

This should motivate broadcasters to reassess their content strategies.

“If you’re doing a live interview, you can’t edit that interview to make it snappier and more interesting,” Cridland, editor at Podnews, explained in a recent future of radio webinar. “As an advocate for radio, this concerns me, because our competitors can polish interviews, and can make stories far more compelling by post-producing them.”

The megaliths of broadcasting have reaped rewards not only for their early forays into the on-demand experience but for crossing over their live audiences. NPR and iHeartMedia rake in more than 25 million monthly downloads each from podcasts. Both dedicate live airtime across their networks to this on-demand content.

“If [an advertiser] wants to sponsor [a show], I can now actually redistribute that back across broadcast radio,” Byrne illustrated. “For a lot of brands, [scale and reach] is the key. They can’t get into the medium yet because they feel like it’s just not enough scale. This solves that problem.”

Just in time for the pandemic, iHeartMedia launched, in February 2020, a custom advertising network for marketers seeking to reach growing on-demand audiences.

While this may seem like a case of the big guys getting bigger, the most plausible future for video content producers is that…

Independent operators will wrestle market share away from the major networks.

The available space on the internet does not fall between 87 and 108 megahertz on the electromagnetic spectrum. From the same device, we can view a live stream of cows grazing fall fescue in upstate New York as easily as we can scrutinize the constitutional powers of Liechtenstein. On-demand content is available, yet...plentiful. There is a lot of inventory, which provides an opportunity for storytelling virtuosos.

“Doing things well will shine above doing a lot of things,” Donald Albright insisted during the 2020 NAB Radio Show virtual session, Creativity and Profit. “The space is much more democratic.”

Albright and independent filmmaker Payne Lindsey co-founded Atlanta-based Tenderfoot TV in 2016, launching the true-crime podcast “Up and Vanished” to critical acclaim and more than 330 million downloads. It has since been adapted into a TV series for the Oxygen Network.

The 10-person Tenderfoot team -- five of whom have a background in film and television -- reached No. 1 on Apple podcasts with "Up and Vanished" and then proceeded to repeat the feat with their next four podcast series.

Tenderfoot TV's small team has thrived by rejecting the industry norms for success.

What’s the secret to Tenderfoot’s success? Presence. “Up and Vanished” centered on a missing person cold case in the group’s home state of Georgia. As host, Lindsey didn’t recite police and news reports and sprinkle in recorded interviews; he physically investigated the case and embedded his audience for every step--including a discovery that led him to seek clues at his own grandmother’s house.

Like Tenderfoot, local creators have huge advantages over network talent. They breathe a material consequence for the stories they speak, and, principally, they are considered dependable. During the pandemic, local broadcasters have only become more important.

“In addition to proximity, there are many other reasons why local news is being embraced more than ever, both on TV and through AM/FM radio and podcasts. Nielsen’s survey shows an increase in spending locally, and local news is a way to bolster an individual’s connection with the community. Trust is also a major concern, as many people look to anchors and content that provide reliable and relevant information.”

More and more data is proving that advertisers don’t want to be in a “toxic mess of people screaming at each other,” Brian Byers, Neuhoff Media vice president of development, argues.

Neuhoff operates 21 radio stations across five, mostly rural, markets in Illinois and Indiana. Audience penetration and advertising revenue are at a premium for this small network. So Neuhoff has expanded into online and on-demand content.

“[An online presence] gave us the freedom to think beyond just being a radio station,” Byers remarks.

This thinking is vital for radio station operators, since...

Soon, the majority of a traditional radio station’s income will come from its multimedia channels.

Where are the advertising dollars increasing? Mostly, where the kids are: TikTok, Instagram, YouTube, and so on. And you can’t make an impact on those platforms without video.

Online media spend in the United States is expected to reach $167 billion in 2020, up 15 percent from 2019, per a report from Winterberry Group. In contrast, 61 percent of ad buyers expect to decrease terrestrial radio spending in the coming year, according to an Interactive Advertising Bureau survey.

Where radio stations are limited to surveying audience demographics within geographic markets, digital media allows advertisers to place their messages for exactly the type of consumer they want to engage wherever, whenever, and whoever they may be. Digital analytics also provide marketers more precise measurements of their advertising effectiveness and enable greater flexibility and saturation with their campaigns through remarketing and retargeting (even on multiple devices and platforms.) Essentially, traditional on-air radio advertising is like firing a cannon on a battlefield: everyone knows it’s coming; it’s avoidable. Digital advertising is facing a sniper’s rifle: you won’t get the chance to know you’re in the crosshairs.

To maximize digital advertising revenue, a multi-platform audience must be nurtured. Byers provides a few tips on growing loyalty:

For example, NPR’s strategy is to consider how every single feature story can become monthly, weekly and daily content on its website, social media, podcasts, broadcasts, and video-on-demand platforms.

“Put it in different packages,” Anya Grundmann, NPR senior vice president for programming and audience development, says. “We create a lot of different content from one story. It’s all built from the same chassis that drives the vehicle.”

And it’s a vehicle that more than ever consumes streaming video from work-from-home consumers. Consumers are largely enjoying the changes in daily routine forced by COVID-19. Nielsen’s survey states that 40 percent of people feel more connected to their community and are making more local purchases.

It’s local media owners and advertisers who stand to capitalize on consumers who might forever be sticking closer to home. They just need to be willing to get their content to their audiences.

Jared Thompson, Blinder’s vice president of content, is a former digital communications lead at the NCAA, University of Oklahoma, and Purdue University. Connect with Jared (or our Kiwi co-founders Caley and Ross) for help on how Blinder can remake your current content team into a video production powerhouse without adding new equipment or new headaches.